While I tweeted this on the day of the grand event, I have yet to blog about the most recent graduate from the Wilson Tox Lab, Eugene Choi.  Eugene successfully defended his MSc degree at the end of September.

His research was focused on rainbow trout and the effects of acetaminophen, a common pain reliever that is used extensively by humans and released into surface waters through waste water effluent.  All drugs we consume leave our body through urine and feces; they are flushed down the toilet and join our waste water stream.  For fish living downstream of treatment plants, this means they are often exposed to low levels of complex drug mixtures containing our most commonly used drugs.

Prior work in the lab by Mike Galus had shown that acetaminophen causes histological changes in the kidneys of zebrafish and Eugene determined that similar effects were seen in trout.  Eugene discovered this during his undergraduate thesis and stayed in the Wilson Tox Lab to determine if the impacted organs in trout functioned properly.

Eugene’s research is a great mix of physiology and histology.  He has examined impacts of acetaminophen on liver, gill and kidney and his research demonstrates that organ function is impaired in fish with acetaminophen exposures.  Fish take up less oxygen in through their gills when swimming and gills show swelling in the filaments and lamellae, increasing the diffusion distance for oxygen.  Exposed fish are losing important ions, glucose and protein in their urine and this is coupled with cellular changes in the kidney tubules.  Important data for us when we consider the environmental effects of pharmaceuticals in our surface waters. 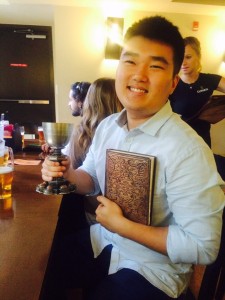