This week is McMaster’s first Water Week, a week celebrating the and connecting the links between water science, technology and policy to deliver local and global impacts.  This is the signature event kicking off the new McMaster Water Network.  This network will be a platform for water science, engineering and policy across our faculties.

So far, this week has been a resounding success with documentary screenings, public lectures, and workshops.  Yesterday was the Student research poster showcase.  Over 60 undergraduate and graduate students presented their research and ideas all around water.  I was amazed at the turnout, both in terms of student involvement, and people at the poster session.  It bodes very well for the Water Network and really showed the extent of water research ongoing at McMaster!

Undergraduate thesis student Shayen Sreetharan has been working in the Wilson lab over the last year.  He was a summer researcher and has been focused on lake whitefish, a species we are increasingly using to study the effects of chemical, thermal, and radiological stress.  In his project over the last year, Shayen did a wonderful job of developing a staging series for lake whitefish and identifying their growth (weight and morphology) throughout development.  His work has been recently submitted for publication – an amazing feat for a 3rd year undergraduate.  Shayen presented his whitefish staging series and growth data as part of the Student Research Showcase.

Shayen won the Philomathia Water Prize in the undergraduate competition.   Congratulations on your success! 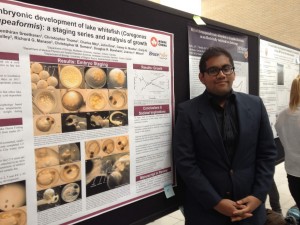 Michal Galus has been a graduate student in my lab for the last 5 years, working on his PhD.  He completed his BSc degree at McMaster in Biology and got his first taste of toxicology in the lab of Dr. Grant McClelland working on metal toxicology in zebrafish.  He entered my to start his MSc and helped launch a new research program; the impacts of human pharmaceuticals on fish.  Much of Michal’s research has focused on four drug; acetaminophen (common analgesic), carbamazepine (anti-epileptic and mood stabilizer), gemfibrozil (lipid regulator), and venlafaxine (anti-depressant).  The research started with one question in mind: Do low concentrations of human drugs cause negative effects in fish?

in the wild, human drugs are entering the aquatic environment through our waste water treatment plant discharge.  Contrary to what many might think, the direct use and excretion of drugs and their metabolites into sewage, is the major source.  These compounds are emerging as contaminants of concern because studies, like those that Michal has completed during his PhD, are showing that chronic exposure to low concentrations decrease reproduction, disrupt normal development, and cause cellular changes in major organs such as the kidneys.

Michal successfully defended his PhD on August 29 and is now completing final edits on his dissertation.  Congratulations Mike on a job well done! 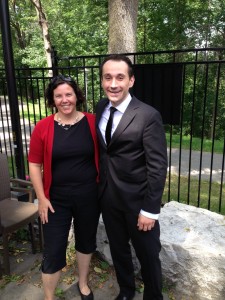 Emily Hulley is just completing her second summer working in the lab on whitefish morphometrics.  Returning students are always a great addition to the lab because they come with existing lab skills and help with the training of the new students experiencing research for the first time.  Emily worked with Chris Thome and Charles Mitz over the last two summers and as she returns to University of Guelph for her last year, we wish her the best in completing her degree and graduating.  Here she describes her summer research.

“I have been studying the effects that formalin and ethanol preservation techniques on the morphometrics and weights of whitefish hatchlings and eggs. I have also been assisting in the research of various chemical, thermal and radiation stressors on the development of whitefish through imaging and morphometrics. Lastly, I’ve been working with cell culturing rainbow trout gonad cell lines (RTG-2 cells) to investigate the different effects that radiation and thermal stressors have on cell survival.
Outside of the lab, I spend most of my time outdoors hiking/camping, with friends or playing with my kitten.” 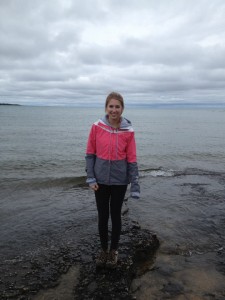 In a series of posts, I will ask each of the amazing summer students to introduce themselves and their research project.  This summer we have had plenty going on and the research the summer students are doing is greatly impacting our lab.

Charlotte has been working on our whitefish project, primarily with Chris Thome, a PhD candidate.

Outside of work, I’m currently studying for the MCAT and like to spend time with my friends and family.” 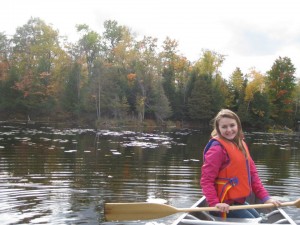 The WilsonToxLab regularly attends the Annual Meeting of the Canadian Society of Zoology and this year was no exception.  Indeed, there were nine of us in attendance and lots to see from the WilsonToxLab in terms of presentations.  Mike Galus, Eugene Choi, Casey Mueller, John Eme, Chris Thome, Charles Mitz and Joanna Wilson all presented recent research results from the lab.  In addition, our collaborators at U Regina, Chris Somers and Richard Manzon, had students from our whitefish project presenting: Carly Graham, Becca Eberts, Dan Stefanovic and Katy Session all gave great whitefish talks.  Go Team Whitefish!  Since most of Team Whitefish was at the Montreal meeting, we stayed an extra day for a project meeting making this an extremely useful trip for our research program.

This year, the meeting was in Montreal and a bit unusual as CSZ partnered with two other Canadian societies (Ecology and Evolution and Limnological) for the first ever joint meeting.  That added a whole new flair and the opportunity to see a much wider range of science.  The plenary presentations were excellent and I really enjoyed the Fry Medal presentation to Dr. Glen van der Kraak from U Guelph.  Glen is a great scientist and it was wonderful to see him talk at length about the intersections of his basic (fish endocrinology) and applied (endocrine disruption) research streams.  It is a much deserved award.

There was a bit more politics at this meeting than usual and it came on two fronts: women in STEM and the role of science in public policy.  CSZ had a panel of all male invited speakers and award winners and apparently there was some animated discussion on the society Facebook page about why there were no women.  An invited speaker even started his talk by commenting on the lack of women giving plenary presentations and why he felt this was a problem.  What was interesting was the discussion and response from CSZ.  They have collected some data, recognized this is an issue, and formed a group to discuss how to fix the issue.  Amongst members that were discussing this at the meeting with me, there was solid support for change.  So I say good for CSZ for responding to the comments quickly, with an open mind and the motivation for change.  We need young women in science fields to see that things are getting better.

The second interesting change was all the discussion about scientists engaging in public policy and advocacy for the role of science in society.  I haven’t seen this at a conference before and it reflects the ongoing belief that our current government is anti-science.  Interesting discussions all round this topic for sure.